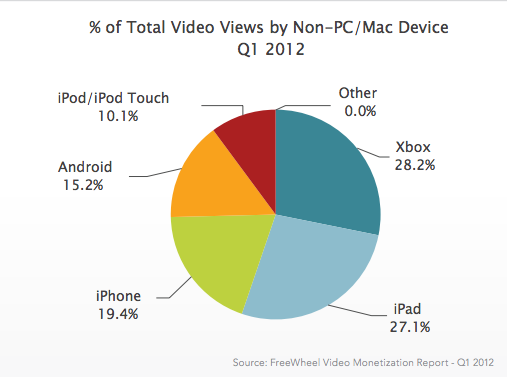 Peter Kafka at the WSJ wrote on, “Microsoft’s Sneaky Success: The Xbox Is the Most Popular Video Player in the U.S.”.  Drawing from a report by Freewheel, the online video ad company, more people are watching Web stuff on Microsoft’s machine than on the iPad, iPhone or any Android machine, anywhere. To quote Kafka,

“…And when it comes to home viewing, competitors like Apple TV, Google TV and Roku are so far behind they’re not even competitors.”

This is consistent with what we’re hearing from many partners – that video watching on Xbox LIVE is a hit with consumers and advertisers.  With recently announced ad partnerships with ESPN, CBS Interactive Gamespot, Manga, and MUZU.TV joining Sony’s Crackle, MSNBC, TMZ, NBC’s Today and UFC, we’re off to a great start together with our partners. I’m so proud of my team!

Copyright 2004-2021 All Rights Reserved. Any opinions expressed may not be representative of my employer. Provided as-is, without warranty and confers no rights.